The Wonder of Denim

Can you imagine a world without denim? This material has become such a huge part of our lives, one could say the very fabric of our society. It is incredibly versatile, can be worn in many different ways and is one of the most flexible materials in our wardrobes. Whether it comes in the shape of jeans, shirts, skirts, jackets or accessories, denim has long been a unisex staple in wardrobes across the globe. But where did all begin and how did it become the world’s favorite fabric?

There are different theories about the birth of denim, but it is generally thought that first begins appearing in the late 1700s in Italy and France. It is thought that weavers in the town of Nimes, France were attempting to reproduce a material they had seen in Genoa, Italy. What they ended up with was somewhat different but a cotton twill which we now know as denim. ‘De Nimes’ meaning ‘From Nimes’ in English is the origin of the word denim.

Italian workers soon adopted the fabric for their workwear trousers due to its strong characteristics and cheapness. They wore dungarees that were made from a slightly different fabric called dungaree, named after the Indian village of Dungri in Bombay. The dungarees were exported to the UK for factory workers and were later seen on the prospectors of the American West Gold Rush in the 1850s.

A young man named Levi Strauss had emigrated from Germany to the U.S and on hearing of the Gold Rush, moved his family business west to take advantage of the economic boom. There he became acquainted with a tailor who had been tasked with creating tough workwear for one of his clients. Levi showed him the fabric and the tailor-made some trousers with strengthening copper rivets on the seams. The first pair of Levi jeans were born!

Jeans entered the fashion world as tough workwear and thanks to their comfort and durability, they would soon become an integral part of both culture and fashion right across the world. It was the 1950s that saw the huge surge in popularity for this humble piece of workwear. The first stone wash jeans began to appear during this decade, giving the effect of being well worn and being discolored. It’s not just Levis that is synonymous with denim. Check out the designer range of Mens Farah Jeans from https://www.ejmenswear.com/men/farah/jeans 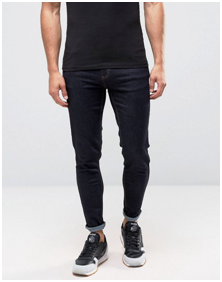 Jeans would soon become a symbol of youth culture and rebellion, with an anti-establishment connotation. This was partly thanks to Hollywood heartthrobs like John Wayne, James Dean and Marlon Brando making them look cool, sexy and rebellious on the big screen.

Denim has appeared in many places, worn by Italian sailors in the navy, farm laborers, mine workers, and models. Cowboys donned denim and so it became linked to all things Western as well. Hollywood bad boys chose jeans and made them instantly fashionable. Why did the average man, woman, and child choose to wear them? Because they shape to your body, fade in a unique way, get better with age, go with virtually anything and can last for many, many years!