How sport can help to improve confidence in young girls

For many years, researchers have told us that women who play team sports are less likely to suffer from depression or low self-esteem. It seems logical. Playing any sport leads to better levels of fitness, which can support higher levels of self-esteem as well as giving them more confidence in their abilities. However, researchers from around Europe recently discovered that some sports – in particular, football – provide women with even more confidence and self-esteem. 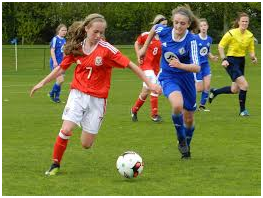 A recurring theme in the feedback revolves around their team as a second family – one in which they formed friendships and contacts which lasted them into adulthood. This special team bonding feeling is well documented in sports psychology, and researchers believe it mimics our prehistoric behavior in tribes. When a close team works together in problem-solving activities, discusses tactics and names a leader, individuals feel more valuable and secure. The team grouping also means that the girls feel supported both in terms of their football training and outside of the football field. They have a ready-made support network of young girls of a similar age.

Take a Look at the Scoreboard

The results come from questionnaires given to over 4,000 girls and young women around Europe, which asked questions about the sports they play and psychological and emotional feelings. While all the participants who played sports showed better results, the girls who played football scored the best. 80 percent of football respondents said the sport made them feel more confident, and 54 percent said their self-esteem had improved.

This is because humans, like dogs, are social animals, and we like to belong and know our place. Studies also show that wearing matching Football Training Kits cements this sense of belonging and improves team building and performance. It’s a piece of sports psychology that leads many managers to sites such as www.kitking.co.uk to see how they can help their team feel more connected. Also similar to pack animals they will look after each other both on the field and off. Meaning that if one of the girls is having a tough time they will all pull together to support and encourage her as well as offering helpful advice when needed.

One of the most promising aspects of the study showed that the positive benefits of football for women weren’t left on the field. The girls reported that the problem-solving skills they developed helped them cope with pressures at school, at home and in their everyday lives. However, the researchers also found their results replicated previous studies into the beneficial impact of sport on women. Study leader Dr. Paul Appleton found that 58 percent reported overcoming a lack of self-confidence after starting football, but a healthy 51 percent of women and girls reported the same positive feelings from participating in a range of other sports too.